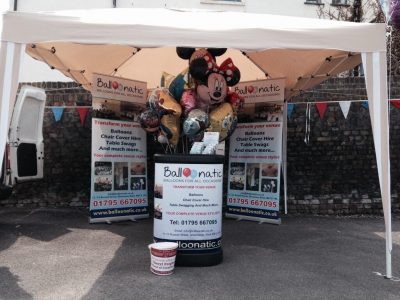 As it’s “throw back Thursday” #TBT we thought we would re-visit the great day we had with former Eastenders actress Cheryl Fergison.

Any Eastenders fans in Dartford on that Saturday were in for a shock – the last time they saw this character she was dead.

But Cheryl has been pretty busy since her character Heather Trott was murdered by Ben Mitchell in 2012.

We joined her at Wisdom Estates in Dartford for her fun day in aid of her charity, the Cheryl Fergison School of Creative Arts which supports underprivileged children across the South East. We sent Shirley & Sam with a huge bunch of everyone’s favourite character balloons to sell and a percentage of our profit with donated to Cheryl’s charity.

Wisdom Estates was one of the first businesses to pledge sponsorship for disadvantaged children and to offer to help raise further support.

“She’s passionate about what she does. Quite a few children from the school were there and they enjoyed the day.”

If you are organising a community event and would like our support, please get in touch with [email protected]