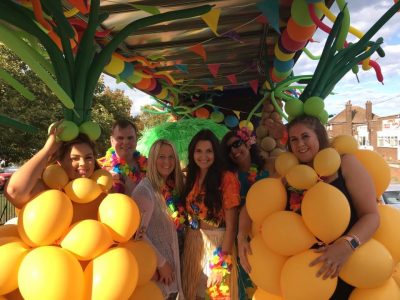 Balloonatic have some great news to share with you all! As you are probably aware Sheppey Carnival took place on Saturday 19thAugust this year, and for the first time in 30 years (Balloonatic are celebrating 30 years of trading this year, can I get a WOOP WOOP), we entered our own float. Sam decided after last year’s carnival that he wanted to enter a float for Balloonatic, and from day one he said ‘if I’m entering, I’m entering to win it!’.

The first thing Sam decided, was that he wanted to enter a 45ft lorry for the WOW factor – if anyone knows Sam, you will know that when it comes to making the business grow, he doesn’t do things by halves! Thanks to Nick Watts and his team from Dolphin UK Limited for the loan of the lorry, and the driver!

Now he had the task of trying to fill a 45ft artic lorry trailer with as many balloons as possible and deciding on a theme. After many discussions between Sam and his group of friends (thanks Tommy, Hayley, Sian, Aimee, Natalie and Charley for your ideas), he decided on a Summer Party theme which would incorporate bright colours, loud summer music and fancy dress – if you didn’t already know, Balloonatic now stock fancy dress for all occasions!

Preparations started on the Thursday, with Sam spending most of his time in the office inflating over 2000 balloons, along with Christine who was sick of the sight of balloon garlands after day two. If you’ve visited Balloonatic in the last three days then you would’ve seen said garlands, and a very BUSY atmosphere! Sam arrived at work at 7am on Friday and finished at 10pm that evening – he grafted in three friends Friday night, persuading them to help with balloon inflating, and bribing them all with a Dominos Pizza. Charley and Sian were busy inflating more balloons for the float, whilst Natalie was on the decks creating our playlist – if you follow us on Instagram, you’ll see Natalie getting in the carnival spirit!

It was all hands on deck come Saturday morning. Christine was busy delivering over 1000 balloons to our customers, whilst Sam and Kevin (Sam’s Dad, who had just finished a night shift!) were busy climbing ladders and making an empty 45ft lorry into a Summer Party! By midday we had another six helpers who were instructed by Balloonatic’s Carnival Director, Sam with what needed to be done! Safe to say we were all sick of balloons by 3pm and in need of a sit down!

At 4pm we made our way round for judging along with friends and family who were also joining us on the float (special thanks to everyone for joining us, especially two week old Noah, Balloonatic’s newest recruit!). The music was playing (Thanks to Sam’s friend Ollie who supplied us with incredibly loud speakers and Swale Tech LTD. supplying us with a generator), we were all in positions, patiently waiting for the announcement of this year’s carnival float winners!

Before we knew it, Sam was being called over to the side of the float and it was announced that Balloonatic’s Summer Party Carnival Float had won! Sam’s day was made and everyone was in high spirits ready to show our carnival float off to the people of Sheerness!

All in all, the carnival was fantastic. So many people lined the streets of Sheerness, and there were huge cheers as we passed! Sam arranged for eight huge confetti cannons to be let off as we approached the Clock Tower where 106.9 SFM were broadcasting LIVE, which meant that Balloonatic also won the ‘Spirit of Carnival’ award – the judges commented on how Balloonatic’s float enhanced the carnival spirit in Sheerness and we would all agree!

I’d also like to add that Balloonatic won another award – the Chairman’s Choice Aware from Bob McCall thanking us for our continual support of Sheppey Carnival over the past 15 years! You’ll be pleased to know Bob, that we will be entering Sheppey Carnival for as long as it continues, and Sam will be doing his best to make sure Balloonatic wins every year!

Sam and Christine would like to thank everyone who gave up their time to help prepare our carnival float and everyone who has joined us so far to celebrate 30 years of trading!! BRING ON NEXT YEAR, BALLOONATIC’S FLOAT WILL BE BIGGER AND BETTER!!!

Our position with COVID-19